The well-known treatment of the alveolar bone defects is guided tissue regeneration (GTR). Engineered membranes combined with osteo-differentiation factors have been offered a promising strategy for GTR application. Recently, Poly(ε -caprolactone)(PCL)-forsterite (PCL-F) nanofibrous membranes have been developed. However, PCL-F membranes could not promote bone tissue regeneration. The aim of this research is to encapsulate an osteogenic factor (dexamethasone (DEX)) in PCL-F membranes and evaluate the effects of forsterite nanopowder and fiber organization on DEX delivery for GTR application. The hypothesis is that the release kinetic and profile of DEX could be controlled through variation of forsterite content (0, 5 and 10 wt.%) and fiber arrangement (aligned and random). Results demonstrated while DEX release was sustained over a period of 4 weeks, its kinetic was governed by the membrane architecture and composition. For example, aligned PCL-F fibrous membrane consisting of 10%(w/v) forsterite exhibited the least initial burst release (13% release in the first 12 h) and allowed sustained release of DEX. Additionally, forsterite nanopowder inclusion changed the kinetic of DEX release from Fickian diffusion to an anomalous transport. The bioactivity of released DEX was estimated using culturing the stem cells from human exfoliated deciduous teeth (SHED) on the membranes. Results demonstrated that proliferation and osteogenic differentiation of SHED could be governed by DEX release process. While DEX release from the membranes decreased SHED proliferation, stimulated the matrix mineralization. Our finding indicated that aligned PCL-F/DEX membrane could be used as a carrier for the sustained release of drugs relevant for GTR trophy. 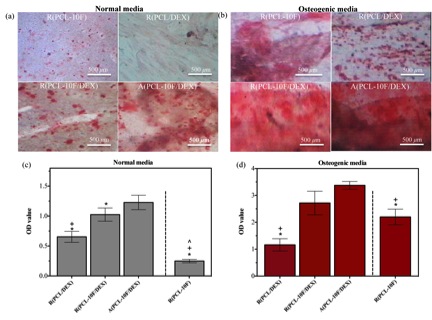